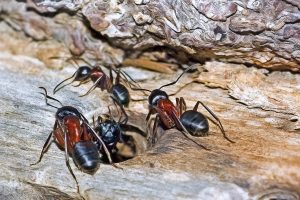 Some Common Ant Species in New England Include:

Ants undergo a complete metamorphosis: egg, larvae, pupae, adult. Ant eggs are almost microscopic. The larvae are very soft, with a pear or gourd shape and off-white in color.  Adult workers feed and groom the larva. After several weeks and several molts, the larva enter the pupal stage. Some ant species pupae are naked while others are in a silk cocoon. When a colony is disturbed, ant workers will carry away the brood (eggs, larvae and pupae).

Ants take anywhere from 4 to 8 weeks, sometimes longer, to go from egg to adult. This time-frame depends upon the ant species and the surrounding environment. The ant queen sheds her wings and digs or seeks a small gallery in bark, under stone, or in a recess within a structure. She seals herself in this cavity and remains nearly dormant while eggs develop within her. The eggs are then laid and hatch in the sealed nest cell.

Workers of the first brood dig an opening out of the nest gallery and begin to forage for food for themselves and the queen. More food for the queen equates to more eggs being produced. Workers are all sterile females and care for the brood.

It typically takes a year or two for colonies to develop to the point where significant numbers of new males and queens are formed. Mated female alates, also known as “swarmers”, are queens that seek to establish new colonies. Males present no function other than to inseminate potential queens. Species with winged females have winged males. The male ant dies within a few of mating, which can occur in the nest, on the ground, or in the air.

Foraging ants bring food and water back to the nest and pass it to other workers through a process called “trophallaxis” – the mutual exchange of regurgitated liquids. The nest-tending workers then pass the food to the larvae or the queen.

Ants generally obtain their sugar by feeding on honeydew excreted by aphids and scale insects found on plants. Dead insects and earthworms are frequently scavenged, and some ants gather seeds as food.